Deposition is a natural geological process that transports sand, silt, and sediment from one place and deposits it in another. Agents like water, wind, gravity, and glaciers carry out this transportation.

The sediment is generated by erosion and weathering events. These agents are so powerful that they can transform boulders and mountains into the sediment. Sometimes chemical weathering (caused by acid rain) breaks down solid rocks and stones. The sediment is a raw material for new sedimentary rocks.

For example, ocean waves continuously hit rocks and erode them. The eroded particles are then carried to other places and usually end up at beaches and seashores.

There are four agents that participate in the process of deposition. They are as below:

Frozen rivers/glaciers: These agents carry the eroded material or break large pieces from existing rocks and mountains when they melt or slide from one place to another.

Gravity: It interfere with the erosion when the rocks fall due to the earthquake.

Wind: The wind carries lighter sediment like sand, dust, and extremely small particles. You may have already seen how your porch gets all sandy after a windstorm. Imagine the places where windstorms occur regularly and how the wind will deposit sediment there.

There are several elements that affect the process of deposition after the erosion of rocks. Here they are:

Speed of the Deposition Agents: The speed of natural agents plays a vital role in the process of deposition. A lower speed will deposit the sediment near to origin site. A faster speed will take sediment to faraway places from the origin site.

Sediments’ Size: The size of the sediments, their thickness and volume also play a vital role in this process. The heavier particle will be deposited near to the origin site and the lighter will travel more distance.

Deposition affects the geographical environment in many ways. Following are them:

Gravity: It creates rock-sliding on the sides of the mountains and the rocks are deposited at the bottom.

Weight: The weight of the eroded material also creates rockslides.

Wind: Wind creates different sand dune patterns in deserts while taking the sand with it.

Rivers: When the rivers deposit sand and other eroded material with them, they create deltas. So, the water speed slows while reaching to deltas to be a part of the ocean.

Ocean Waves: The ocean waves with a forceful power create beaches and sand bars by continuously depositing sand to a particular location. 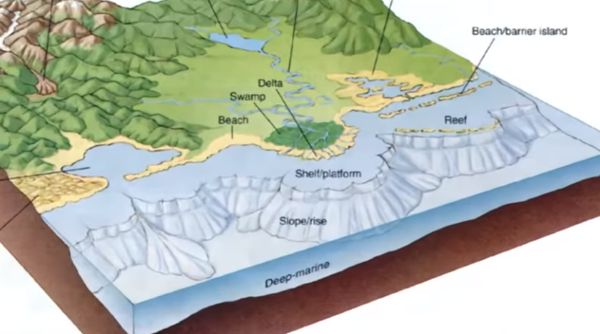 Deposition’s overall effect is positive on earth. For example, the Nile in ancient times bought silt from the nearby lands at its bank. The silt was fertile and increased the agricultural output.

The deposition of alluvial sediment form river deltas. The common examples are the sedimentary delta in the river Nile and Mississippi Delta in the US.