What is Druzy, Its Health Properties and How to Spot Fake One?

Druzy is also known as Druze, Drusie, and Druse. It is used as a gemstone in jewelry due to its sparkling nature and wide array of colors. A set of tiny sparkling crystals of minerals constitute Druzy in different colors, shapes, forms, and size. It is found on the surface of sedimentary and igneous rocks. In an apparent look, it seems like a piece made of sugar or candy. The tiny particles of stones sparkle and absorb light, giving an intriguing and beautiful look when placed against light.

Like many other stones used in jewelry, Druzy is also formed by nature. When the water takes part in the process of deposition, it brings minerals from the sedimentary rocks. The water evaporates gradually and the minerals are cooled down. These minerals form crystals in deposition state. Depending on the composition of different minerals, Druzy is formed in any color such as white, pink, green, purple, golden yellow or jet black, etc.

Mostly, you can find Druzy on the rocks near to the shoreline or riverbeds. Druzy is famous for its healing powers such as to reduce tension, to open the blocked energy and to purify the soul, etc.

Druzy is available in many different types due to differences in its composition. Druzy comes in various types, such as quartz druzy, rainbow, hematite, calcite, dioptase, vanadinite, and turquoise. The most common type is quartz druzy.

The common quartz druzy types are listed below.

Druzy is available in different sizes ranging from tiny pieces to larger stones. Druzy crystals are extremely sensitive and can be damaged easily. 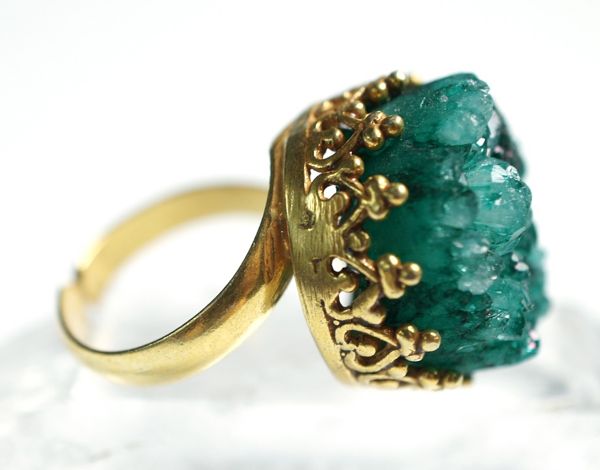 The gemstone crystals present in druzy can vary from one specimen to another. The deposition and growth of crystals in druzy are more important than the type of gems present in them.

Druzy agate also contains quartz. However, agate consists of chalcedony as a major component. Other minerals like calcite, garnet, dolomite, and malachite are also present in druzy. Some druzy stones are also made from metallic vapors. This is a synthetic process, and it gives stones an iridescent and intriguing sheen with an artificial coating.

A typical (real) druzy’s properties can be summarized in the table below.

How to Spot a Fake Druzy?

Many people have reported buying a fake druzy. Fake druzy is common in the market. Here is a checklist to help you buy a real druzy and spot a fake one.

How to Care and Maintain a Druzy?

Druzy is durable and hard. However, it can be damaged by hard knocks. Therefore, druzy pendants, earrings, and brooches last longer than rings and bracelets. Here’s how you can clean a druzy.

Where is Druzy Found?

The biggest reserves are located in Brazil, India, USA, Thailand, and China.