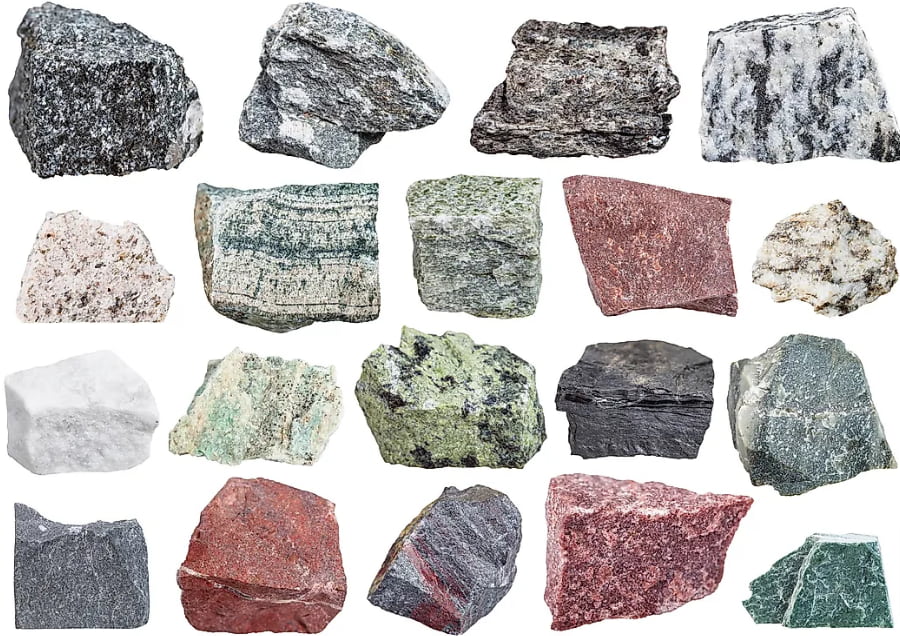 How are Metamorphic Rocks formed?

Foliated Metamorphic Rocks: Foliated metamorphic rocks have a layered or banded appearance. This appearance results due to exposure to heat and directed pressure. Common foliated rocks are slate, phyllite, schist, and gneiss.

Non-Foliated Metamorphic Rocks: These rocks don’t have aligned mineral crystals and form as a result of low pressure and temperature. These rocks usually form when parent rock consists of blocky minerals like quartz and calcite. Common non-foliated rocks are marble, quartzite, and hornfels.

Metamorphic rocks are usually classified based on the following properties.

Metamorphic rocks have different uses. Some rocks are best for the construction industry, home décor, roofing, dimension stone, sculpturing, and as a host for precious gemstones and marbles.

The exact use of the rock depends on hardness, quarrying ease, and how easily it can be processed.

Low-grade Metamorphism: The temperatures are between 200 to 350°C with relatively low pressure. Low-grade metamorphic rocks are characterized by hydrous minerals.

Contact Metamorphism: It occurs adjacent to igneous intrusions with high temperatures due to superheated magma. The metamorphism process is limited to a small area because only a small area is affected by magma. Contact metamorphism has low pressure because the temperature contrast between the surrounding rock and magma is high at shallow levels in the crust.

Cataclastic Metamorphism: It happens when two rock bodies slide one another along a fault line. The rocks are created as a result of mechanical deformation. When rocks slide past one another, heat is generated, mechanically deforming the rock. Cataclastic metamorphism is uncommon and happens in narrow zones where shearing has occurred.

Metasomatism: When fluids alter a preexisting igneous, sedimentary, or metamorphic rock, it is known as metasomatism. The new rock has different compositional and mineralogy.

Lapis Lazuli, or lapis, is one of the oldest spiritual stones known to mankind. It has been used by healers, ...

Marble is a non-foliated metamorphic rock frequently used worldwide in various applications. Very few rocks have so many uses as ...