Nicolas Steno, a Danish scientist was the first to propose the law of superposition. Later, it was first used by William “Strata” Smith who generated the first geologic map of UK.

According to the law of superposition, “nothing can be older than the material composing it. The material is older and the object composed of it is less old.” 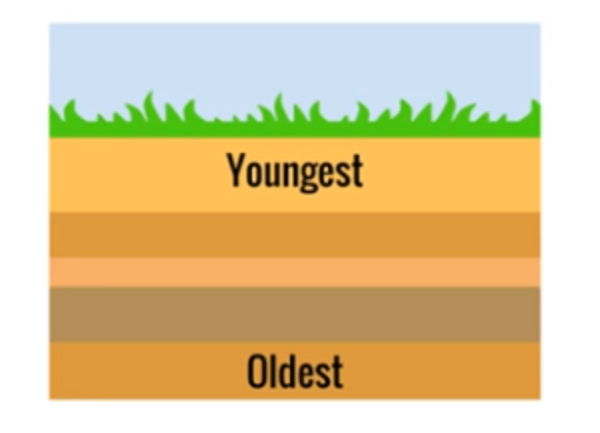 If we elaborate the law of Superposition in detail, it means that the oldest strata lie at the bottom and the newer strata at the top. So, this law is based on the common sense of proof. As we know that the lowest layer has to be laid down first and so, it should be older. The same rule applies and the layers go on to the uppermost one.

When we see the rock formation in paralleled form, the layered sequence of the material such as lava flow or sedimentary layers constitutes a clear shape. In this shape, the bottom layer shows the oldest material and the upper layer shows the youngest material. In the same way, all the layers going from bottom to top are successively younger.

When you apply this law to the sedimentary beds of rock, you give 1 number to the lowest layer and then 2nd to the upper and go on in the same sequence until you reach the uppermost layer.

Application of Law of Superposition

It is compulsory to examine the rock material before applying the law of superposition. The rocks’ layers are usually formed due to depositional events like lava eruptions. However, this is not necessary for all types of rock structures. The older-to-newer relationship (law of superposition) is different in volcanic and metamorphic rocks.

The law of superposition doesn’t work on igneous rocks. The layers in the igneous rocks are formed due to the pressure from the uppermost layer to the lowest layer. Hence, every layer is chaotic. The age of layers isn’t clear in igneous rocks.

The law of superposition can be applied to sedimentary rocks because the nature of fossils can accurately specify the age of the rock.

The law of superposition in sedimentary rocks states that the oldest rocks are located closest to the earth’s surface. Moreover, a rock is defined as young if it has a poorly sorted structure and is made of smaller particles. An older rock has larger particles and a well-sorted structure.

Law of Superposition in Vertical Layers

Law of Superposition in Non-vertical Layers

The law of superposition is also visible in rocks that don’t have a vertical sequence. Examples include layered sedimentary rocks and horizontally layered rocks.

Law of Superposition – Relation to Geomorphology

Geomorphology is the study of the history and nature of the earth’s surface, landforms produced by erosion, weathering events, transport, and tectonic processes. The law of superposition is closely related to geomorphology, and it explains why a water stream follows specific paths like rivers where the layers are less vertical. Water-deposited material usually forms horizontal layers.

The Law of superposition also explains the formation of certain glacial events like the U-shaped course of the River Rhine. It is made possible by the greater thickness of older sedimentary layers that cover the younger layers.

Law of Superposition and Paleontology

Application of Law of Superposition – A Few Examples 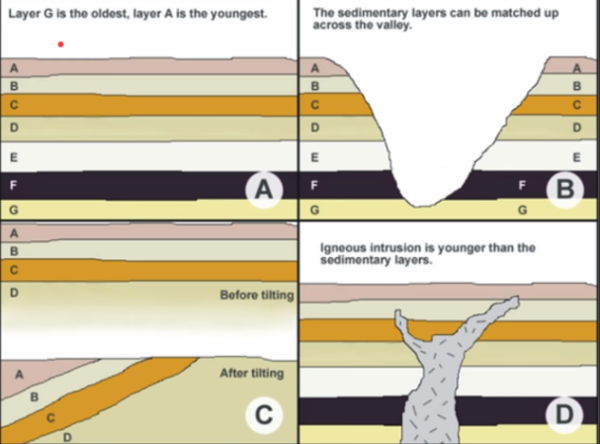 Here, in figure A, you can see the formation of all sedimentary layers. The uppermost (A) is the newest and the lowest (G) is the oldest. The age of the rock will be determined according to the age of each layer.

It becomes the opposite when applying on igneous rock. See the figure “D” in the image above. It shows the igneous intrusion in all layers. The layers with igneous intrusion are younger than the layer (A) even they lie below.

Here, you can see the pebbles are lying at the uppermost layer of the rock. But we cannot apply the Law of Superposition on igneous rocks. The age of fossils will determine the age of a rock. So, on close examination, the simplest pebble was confirmed to be the older one as compared to the conglomerate rock found in below layer. The simple fossil is considered the oldest one and the complex is considered the newer one. So, the pebble is the older fossil and we will determine its age to determine the age of the rock.

Limitations of Law of Superposition