Humans should pay more attention to rocks. You don’t have to be a geologist to know that we live on a rock—the third from the sun—but that rock is actually made of thousands of varieties of rocks and minerals. The oldest known rock is 3.9 billion years old; it’s no stretch to say that rocks will be the only thing to outlast cockroaches and Twinkies.

Those who understand how rocks form and change—and who appreciate the scientific and aesthetic differences in rocks—will build an understanding of Earth and its entire history. Here’s your ultimate guide to being a rock collector:

True rock collectors—sometimes called rockhounds—earn their specimens by hunting them down themselves. Store-bought rock collections are the easy way out. The good news is that even if they realize you’re hunting them, the rocks won’t run away—but it’s still up to you to find them!

(Note: Rocks are not sentient beings. Unless they’re pet rocks.)

Get to know your surroundings

What kind of landscape do you live in? Are there volcanoes? Quarries? Is it named after a rock, like Quartztown? Your education begins with what you already know, but you can also look up your state’s geologic map.

Examine what you’ve got

Once you’ve got a few rocks, take the time to examine them. In good light, look at the rock’s color and texture; how do the particles fit together? Are there any cracks, lumps, or bubbles? Are there any other minerals in it? What does it look like when wet? Does it crumble? Does it dissolve? What happens when you scratch it with a coin? Here’s a quick guide to the three basic rock types:

Toss out the misleading rocks

Not all rocks you find will be natural—pieces of brick and concrete are easily misidentified as natural stones. Landscaping rocks, like those used in garden displays, are often trucked in from far away. Make sure your rock specimens come straight from a real outcrop of bedrock—and you’ll start to learn more about the history of your area.

A proper collection needs a space all its own, and organization is key. Ideally, each specimen you collect will be organized and labeled with what it is and where you found it. If you’re collecting small rocks, there are a number of vendors who sell storage boxes that will help you keep organized.

Storing your rocks isn’t enough; you need to create the conditions they need to prevent oxidization, discoloration, and disintegration. Keep them in a dark, dry, and cool place. To prevent your rocks from absorbing moisture, start collecting those little bags of silica gel you get for free with shoes, some electronics, and certain food products. (But, as the label says, do not eat the silica gel.) 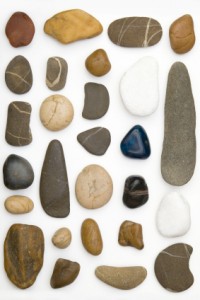 Many rock collectors start in their own backyard, but as your collection grows and your tastes become more exotic, you’ll want to expand your collection area. Always know whose land you’re on when you’re collecting rocks. If you’re on private property, you’ll need permission to remove rocks from the area.

Most states have a Bureau of Land Management that oversee the lands (like parks) that many collectors roam for their rocks. For the most part, you’re free to take what you want, but commercial collecting for the purpose of selling and collecting on lands with a mining claim is usually not permitted. Contact your local Bureau or park district to inquire what the rules are in your area.

As your collection grows, so should your knowledge. You may remember the difference between igneous, sedimentary, and metamorphic rocks, but if you want to go a step further, there are a number of fantastic geology guides that can help you identify your rocks more precisely and make sure you’re achieving a diversity of specimens. We recommend the field guides by the National Audubon Society and the Smithsonian Institute. If you’re specializing in your local rocks, check out the offerings of the state-specific rockhounding series by Falcon Guides.

Consider an investment in equipment

One of the beautiful things about rock collecting is that it can be a low-cost hobby. Besides a field guide, some rockhounds choose to invest in topographical maps of their search area, a rock hammer (don’t forget the safety goggles), and a magnifier. Experts recommend a 10x magnifier for examining your tiniest specimens; the BelOMO 10x Triplet Loupe is a popular choice.

Rocks are everywhere, and you never know when you might stumble across a specimen that pushes your collection to the next level of awesome. Advanced rockhounds always have a container and a field guide at the ready.

Now get out there are start collecting!