When the deglaciation takes place globally, the water level in the oceans starts increasing. As a result, the Holocene transgression occurs. The melting of glaciers has changed the geographical map and natural landscape in different ways. The most recent Holocene Transgression took place 11,700 years ago. As a result, the ice sheets of North America and Europe melted away rapidly. 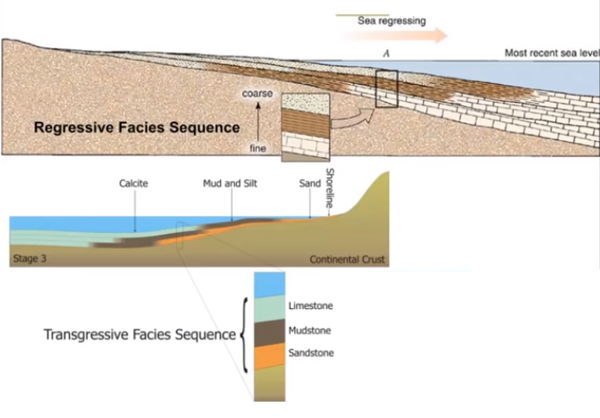 Transgression occurs when the ocean basins have more quantity of water than their capacity. It can also occur when the land starts sinking into the sea. It results in a flood that is known as transgression.

In the same way, the term regression works oppositely. When the water level in the ocean basins is at a lower level than their capacity, the sea starts to expose the previously covered lands. The submerged seafloor is exposed as a result. This process is known as regression. All the changes we see are horizontal rather than vertical.

The best example of regression is the Bering land bridge that is located between Asia and Alaska. When the Pleistocene Ice Ages occurred, a sufficient quantity of water was removed from ocean basins. As a result, the ocean regressed 120 m. So, it exposed the Bering land bridge. In the last ice age, around 18,000 years ago, the water level can from 120 to 130 m below as compared to the sea level today. It also exposed various islands in the ocean. Another example of regression is the Sahara desert that is the largest desert in the world and spread across three continentals. Once, it was a part of the sea. During the ice age millions of years ago, the sea level came at a lower level and it turned into a desert. Gradually, the more area of the land exposed and it became the biggest desert in the world.

The glaciers sliding to the sea and the melting icecaps can increase the level of water in oceans that causes an increase in the sea level and thus, the process of transgression takes place.

Sometimes, the process of deposition also contributes to transgression. When a rock in the sea is formed and the volume of that rock is increasing incredibly in the mid-ocean ridges, it can also increase the water level in oceans. So, the result is in flooding and the nearby land areas start sinking to the sea.

Occasionally, the sea water works faster to remove the materials from the coastline as compared to the streams and rivers. So, the ocean water level starts rising up. As a result, the land starts sinking into it and the flooding occurs.

Due to heavy and continuous rains, the water level in the ocean basins starts rising up and the nearby lands start sinking into the ocean. So, the transgression takes place in various areas of marine.

When there are no rains for most of the time in a year and the temperature keeps rising, it can dry a reasonable quantity of water from the ocean basins. That causes regression. During this process, new islands are formed and new deltas are developed.

It is also due to the buildup of icebergs in the polar ice caps.

When the water level in ocean basins starts rising up, the sea and coastline facies shift to coastal areas. The process of transgression brings fertile lands for the people. It is mainly due to the fertile soil from various parts of the sea fetched by the water to coastal areas.

It forms new islands and sometimes exposes the sunken islands sunken into the water in ancient times.

The sea water reaches to various parts of coastal areas and brings different precious marine treasure for them such as pearls and gemstones, etc.