Trap rock is not a rock, but it is a broad term used to define dark-colored igneous rocks used to make crushed stone for construction. A general term makes it easy to work with rocks. Moreover, rock names are difficult. A layman or a homeowner cannot remember rock names. Hence, the term trap rock comes in handy. Trap rock is also used when the exact mineral composition or identity of the rock is unimportant or unknown.

Trap rock is also known as trapp or trap. The rocks that come under the umbrella of trap rock are non-granitic, dark-colored, fine-grained, intrusive, or extrusive igneous rocks.

The word Trap Rock came from a Swedish word, “trappa,” meaning stair step. It refers to the stair-like landscape in areas with basaltic flows and shallow intrusions outcrop to form steep cliffs and narrow ledges.

This landscape is found in parts of New York, New Jersey, Washington, Oregon, and Idaho.

Basalt is a volcanic igneous and the most commonly found rock on earth. It is a dark-colored rock with a fine-grained outlook. Basalt is usually black, dark green, or brown. Basalt and gabbro have similar compositions, but gabbro is a coarse-grained rock.

Peridotite is subdivided into 5 major categories based on mineral content. Most peridotite rocks are green in color due to their high olivine content.

Diabase is a dark-colored fine-grained, intrusive igneous rock. Diabase is also known as dolerite in the United Kingdom and other parts of the world. Diabase’s mineral composition is similar to basalt and gabbro. However, all three rocks have a different grain sizes owing to the difference in cooling rates.

Gabbro is a black or dark-green intrusive igneous rock. The term Gabbro was first used in the 1760s to name a newly found rock in the ophiolites of the Apennine Mountains in Italy. It was named after a Gabbro, a hamlet near Rosignano Marittimo in Tuscany, Italy.

Gabbro and basalt have similar compositions but different grain sizes. 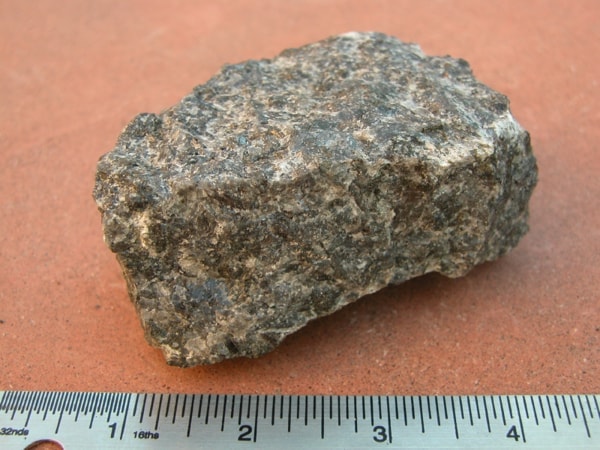 Where is Trap Rock found?

Trap rock is found all over the world. There are huge deposits in Europe, Asia, China, and Russia.

In the US, trap rock is only produced in areas where rocks are present on the surface. Almost 85% of trap rock produced in the US comes from 10 states.