Agate is a gemstone that is used in various decoration pieces and in jewelry. It is made of chalcedony and silica. The crystals of silica, mainly Chalcedony form a grainy stone in bright colors that are known as Agate by the people. The name “Agate” has been given to it after the river “Achates” where once it was found for the first time. Achates is located in southwestern Sicily.

It is mostly found in volcanic rocks or lavas. Agate has great power to fill the cracks in volcanic rocks once the lava outbursts from them. When agate is cute transversely, it shows a network of parallel lines. These lines appear mildly on the surface and seem to divide agate into different sections. Agate with such lines is known as banded agate. 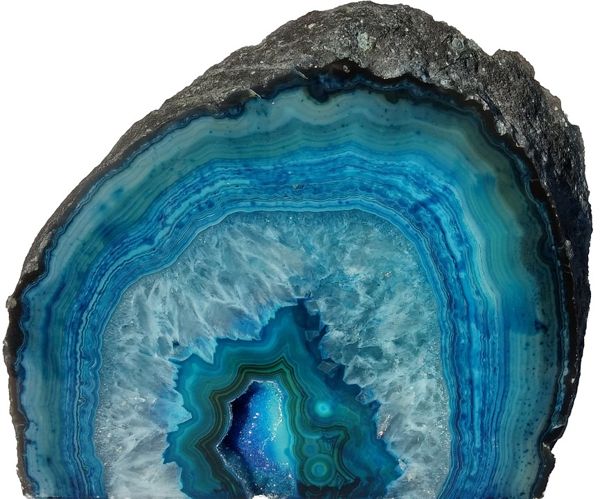 Onyx: It is available in different bring colors. The cryptocrystalline form of the gemstone gives it a prominent shape. Usually, it consists of moganite and silica minerals quartz. The bands in crystalline form lie in parallel form. Generally, the chaotic banding is seen in agates, but it is quite opposite to the face. You can see the parallel banding in it. Onyx is available in a variety of colors such as purple, blue, yellow, white and many others. Traditionally, the bands in Onyx contain white and black colors.

Sardonyx: It is also formed of parallel bands like Onyx, but the bands come with red shades instead of black. So, the combination of white and red colored bands makes it more elegant and prominent.

Iris Agate: As the name suggests, it seems very beautiful and delicate in banding. Iris does not mean that it has a resemblance to the human iris. The name was given to it due to its rainbow colors. Iris is also used for the rainbow. It is banded finely with a vibrant display of colors. When you keep it opposite to the light, you will see it reflects the light. The light touches the thin bands in it and reflects.

Crazy Lace Agate: The banded Chalcedony in white color makes it more attractive. Other layers may be in different colors such as brown, cream, black or gray color. Some Crazy Lace Agate comes with yellow, orange, golden and red colored bands. Occasionally, the jewelers call it “Earth rainbow” due to its multiple colors and light reflecting nature. 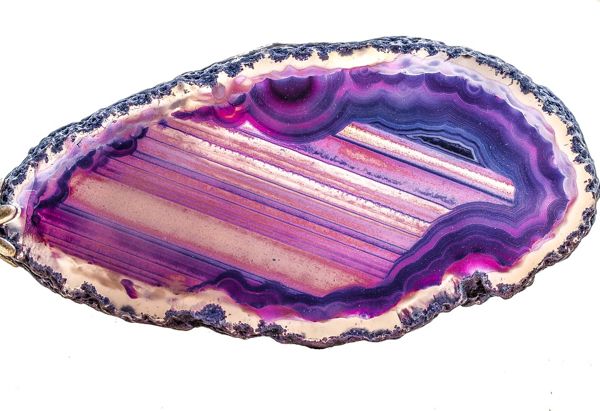 Thunder-egg: It is a nodule-like stone that is found in rhyolitic volcanic ashes. These agate are in a spherical form and mostly the surface is rough. The size of Thunder-egg is usually the same as the size of a baseball. But they can be in smaller sizes too.

Enhydro Agate: These are also nodule-like stones with water trapped inside of them. They are very similar to the fluid-inclusion agates. They are also formed of Chalcedony. Commonly, Enhydro agates are available in volcanic rocks.

Polyhedroid Agate: This type of agate has flat sides and in color-scheme, it is very similar to Polyhedron. When it is cut from the center, the layers of concentric polygons can be seen inside. It is usually found in Paraiba State, Brazil. The crystals inside reflect the light and discharge beautiful rays when kept against the light.

Moss Agate: It is made of silicon dioxide. Along with Chalcedony, it contains some minerals in green color. The grains of the minerals can be seen inside the stone when cut into two sections. Mostly, the combination of white and green filaments can be seen in it.

The Late Superior Agate: This type of agate comes with some stains of iron in it. It is found on the shores of Lake Superior. That’s why it is known as the Lake Superior Agate. The red color is dominant due to iron. You can get it in various regions of Minnesota. The reason is that the glacial deposition distributed it in various parts of Minnesota about 10,000 to 15,000 years ago.

Condor Agate: Luis de Ios Santos discovered it in 1993 and named it as Condor.  The orange colored patterns and an array of colors in bands make it very attractive and elegant.

Sagenite Agate: It is formed with the combination of Chalcedony and different minerals. The golden colored hair-like pointed lines make its design more attractive and unique.

Fortification Agate: The name was given to it due to its sharp-edged bands. These bands resemble with a fortified castle with sharp angles. The array of white, light brown, orange, red and purple colors make it worthwhile.

Fairburn Agate: It is a rare, but very beautiful type of agate found in Fairburn, Custer Co., South Dakota, USA. It is considered the state gem of South Dakota, USA. The stone is found in the volcanic rocks. That’s why the beautiful patterns of colors and designs can be seen when cutting into two sections. The surface is rough when found naturally.

Botswana Agate:  It is a unique agate available in dark and light gray and pink shades. However, some layers come with muted brown color.

Dendritic Agate: It is called the Stone of Plentitude. It is considered the most precious type of agate. Dendritic agate is related to the ancient Greek dryads. So, this type of agate is the sign of good luck and the farmers use to bury it into their fields to get the good crops.

Coyamito Agate Pseudo-morphs: Coyamito is also considered a unique form of agate that is not easily available. It is found in only a few locations in the world.