Granite is a felsic intrusive igneous rock that forms when the magma cools inside the ground. The main constituents of granite are minerals such as quartz, mica, feldspar, and amphibole, also known as hornblende. Some types of granite contain augite in minor quantities and additional ingredients of rutile, zircon, apatite, hematite, and tourmaline. 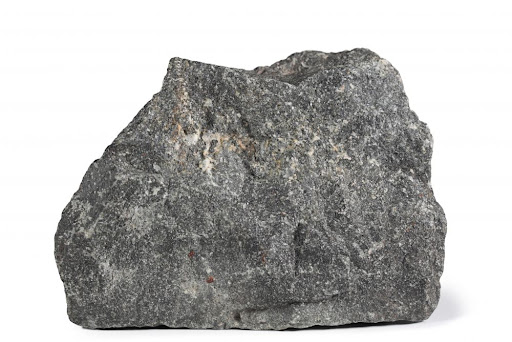 Color variations in the granite vary from yellow to white and pink depending on the type of feldspar. You can find it in several forms, including stock, laccoliths, and batholiths. Let’s explore more details on what type of rock is granite, how it is formed, and its qualities and properties.

What Is Granite & How Is It Classified? 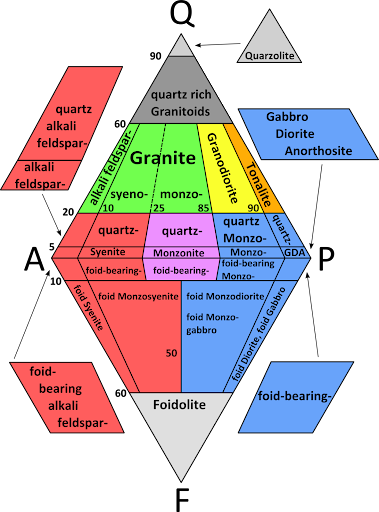 Among different types of intrusive rocks, granite is most commonly found in the earth’s continental crust in pink, white, black and gray colors. Its texture varies from coarse to granular (phaneritic, porphyric, holocrystalline, and pan-hypidiomorphic) due to quartz, mica, and feldspar minerals. There is high feldspar content in granite compared to quartz, which constitutes only 10%.

What Is The Composition of Granite Rock?

Granite isn’t a mineral, but its composition includes different minerals such as:

The high feldspar content is prominent in granite, while the quarts are present along the fillings of crevices in the form of crystals. You can’t easily identify the presence of quartz due to its smoky color, but the hard texture and crystal-like look make it visible. In contrast, other components such as biotite, muscovite, and hornblende are distinguishable due to their black color.

The quartz adds a milky white color to granite, while feldspar gives off white color. Potassium feldspar has pink color, and biotite has dark brown or black color. Other constituents, such as muscovite, are golden, and amphibole is dark green.

What Type of Rock Is Granite – Igneous, Sedimentary, Or  Metamorphic? 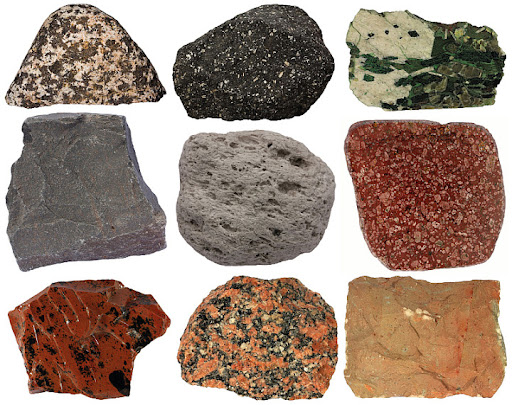 Granite is an igneous rock that forms from magma and changes into solid rock after cooling. The molten rock or magma is liquid due to the high heat in the earth’s core. Granite is highly popular due to its use in manufacturing floor tiles, countertops, and buildings.

This rock is abundant in the continental crust and mountain ranges, referred to as batholiths. Most regions of the earth’s crust consist of sedimentary rocks, while the metamorphic rocks differ from the two. These rocks are formed by the high-pressure exertion on rocks that morphed them into a different composition.

The igneous rocks are further categorized into two types: intrusive & extrusive. There is a slight difference in both as the extrusive rock forms when lava reaches the ground’s surface and cools down to change its shape, while the intrusive igneous rock forms from cooling down magma. 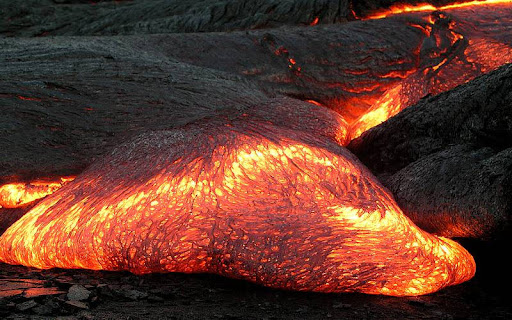 The interlocked crystal shape in igneous rock helps identify the true granite rocks. If you notice your shelves or countertops, the crystals in the rocks will represent the granite.

The Qualities & Characteristics of Granite

The countertops built with granite can sustain high heat without melting. You may wonder why it doesn’t melt at extreme heat if it’s formed from molten magma. But the processing is done in a way to prevent melting. Even the high heat of the oven doesn’t damage it. The ideal building material for your kitchen is granite, but you must take precautions while cooking in a crockpot or cooker because the constant heat emission can add slight cracks on the surface.

There is no need to invest hours cleaning the granite countertops as they require the least maintenance. The surface remains clean even after use, and you can remove all stains with a single wipe. A sealant is also layered on the surface to give more shine and enhance durability.

Scratching a granite surface isn’t easy because of its sturdiness and extraordinary composition. If you deliberately want to add scratches, too much effort is required to leave the marks with a sharp knife.

How to Know If A Rock Is Granite?

Sometimes people misidentify other rocks as granite due to a few identical visual appearances. However, the right way to find out if the rock is real granite you can look at its color, which must be light. Then try to find tiny crystals in it with the naked eye. Look for quartz and feldspar ingredients along with dark-colored mica. Make sure there are no pores on the surface, and it is without any layering.

What Are The Uses of Granite Rock?

The most common use of granite is for construction purposes due to its beauty in design and durability. Most temples, monuments, and gravestones are built with granite to make them last longer.

Countertops & Floor also contain granite to look them more appealing. Granite tiles are the perfect solution to give the surface a smooth and fine look. It isn’t easy to wear out, and you can clean the surfaces without inconvenience.

Some noble varieties of granite are used to Make Jewelry and add gemstones, such as K2 Azurite with a blue tint is one of the unique stones.

Your bathroom floor, kitchen countertops, basins & other shelves are built with granite to give a graceful look. 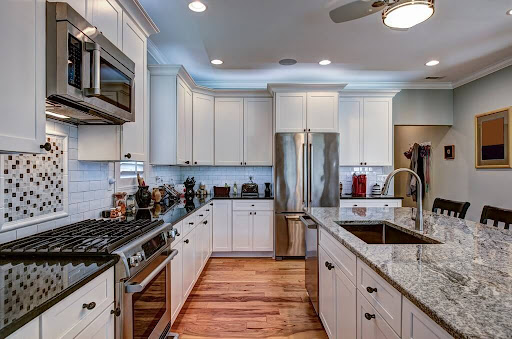 Granite has been used for centuries to make monuments and sculptures. Granite was the go-to stone for ancient Egyptians. They used it in columns, door lintels, sills, walls, and moldings.

Brihadeeswara Temple in Tamil Nadu, India, is the world’s first temple completely made out of granite.

There are many monuments made from granite in the US too. Mount Rushmore in the Black Hills, South Dakota is the most prominent, depicting United States presidents George Washington, Thomas Jefferson, Theodore Roosevelt, and Abraham Lincoln. 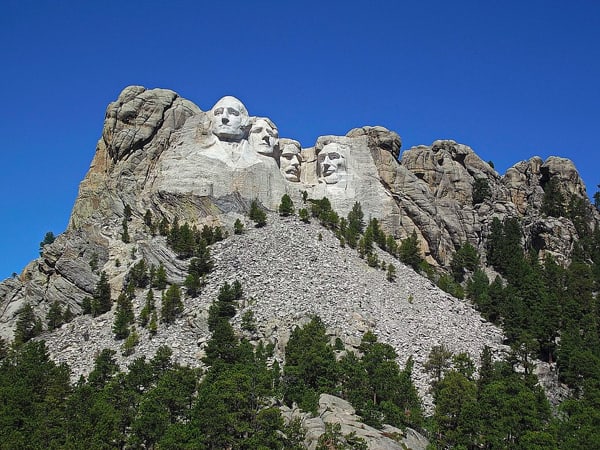 Granite is usually found in large plutons on the continent and areas where the earth’s surface has been eroded. Granite is commonly found in batholiths in orogenic mountain ranges, and its stock masses are around 100 square kilometers. Some reserves are also located in laccolith, trenches, and thresholds.

Most of the granite used in the US is locally produced and comes from Massachusetts, Georgia, New Hampshire, South Dakota, and Idaho.